The stories of Kazakhstan citizens arrested in China

Translated by Gene Bunin on August 23, 2018; Republished with Permission

The following is an English translation of an article published by Нұртай Лахан for Azattyq in the January of 2018. Though old, I found it quite insightful and as such have decided to translate it. It covers the stories of Omirbek Ali, Orynbek Koksebek, and Asqar Azatbek – all Kazakhstan citizens who had been arrested in China and sent to camps/detention centers at some point over the past two years. Omirbek had already been released when this article aired. Orynbek has been released since, in the March of this year. Asqar, taken in the special economic zone at Korgas, is still missing A press conference organized by relatives of ethnic Kazakhs living in China, during which the speakers stated that the government was oppressing members of the Kazakh diaspora “for being in contact with their historical homeland”. December 7, 2017 in Astana.

News of a crackdown on ethnic Kazakhs in China has been coming in starting from April 2017. Among those detained are also those who had moved to their historical homeland from China and had already managed to obtain Kazakhstan citizenship.

Omirbek Bekaly was born in China in 1970, in Turpan’s Pichan (Shanshan) County. In 2006, he moved from China to Almaty and went on to obtain Kazakhstan citizenship in 2008. In the March of 2017, he went to China on a business trip and for reasons, unknown was placed under arrest. He was released in November following eight months of imprisonment. Omirbek Bekaly talked about what he had lived through during these months in an interview with Azattyq.

Azattyq has previously written about Omirbek Bekaly’s arrest in the June of last year. At that time, Omirbek’s wife, Raushan, had said the following:

“My husband, Omir, took a three-day business trip to Urumqi, China on March 23, 2017. He attended an event that was taking place there, after which he decided to visit his mother in Turpan. When he got there, he was detained and taken to Karamay (a city in the Xinjiang Uyghur Autonomous Region). Two months have passed without any news of him. He’s being held under arrest.”

Following this interview, Azattyq inquired about the matter with the Ministry of Foreign Affairs (MFA), informing them of the situation that Omirbek Bekaly was in. Later, his wife would say that MFA representatives came to her home following Azattyq’s inquiry and asked her for information about her husband.

ARRESTED WHILE ON A BUSINESS TRIP

In his conversation with an Azattyq reporter, Omirbek said that Kazakhstan’s MFA representatives only came to see him four months after he was first put in jail. He would be imprisoned for another three and a half months following his meeting with the MFA workers.

“We took a business trip to Urumqi to discuss issues related to meeting visitors from China who were planning to come for the EXPO,” he said. “The discussions ended up lasting two days. After which I asked for a day’s leave to go say hello to my parents in Turpan’s Pichan County. On March 26, my father slaughtered a sheep and invited guests over to celebrate my visit. However, at ten in the morning, our home was visited by five policemen, who told me that my father was 80, of old age, and that they wanted me to come to the local police station for a talk. Making it back from there would turn out to be a real trial for me.”

According to Omirbek, he was first accused of “inviting four people to Kazakhstan, helping them with the paperwork, and then charging them money for it”. After being held at the local police station for eight days, he was brought to the police station in Karamay.

“After I was brought to the Karamay police station,” he recounted, “the station chief looked me in the face and said that since I was a citizen of Kazakhstan, let Nazarbayev himself come get me out. He then gave me the fig sign, as a means of showing his disdain for Kazakhstan. I couldn’t say anything in return. I was accused of having sent invitation letters to four people for entry into Kazakhstan in 2008.” 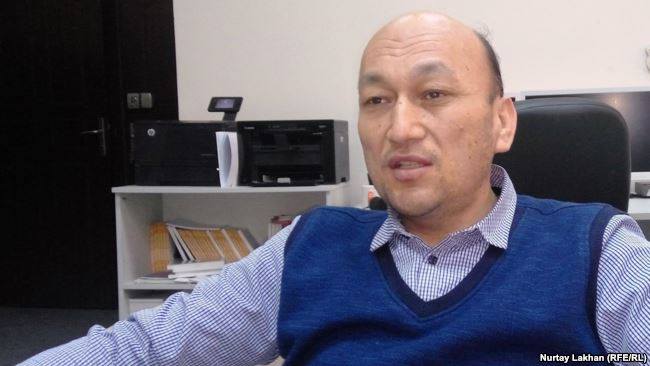 Omirbek Bekaly, an ethnic Kazakh who says that he spent eight months imprisoned in China after going there on a business trip. December 30, 2017 in Almaty.

Omirbek Bekaly would spend seven months in a detention facility and 20 days in a so-called “political education center”.

According to Omirbek, the MFA representatives told him that he had the right to three meals a day, the right to medical aid as needed and that no one had the right to physically abuse him. They also promised that they would remain in contact. He recounted being fed only once a day, however: a meal of boiled cabbage and steamed bread. Omirbek said that he lost a total of roughly 40 kilograms over the course of the eight months spent in incarceration, his weight dropping from 113 to 74.

“Later, there’d be two instances when they called me in for questioning,” Omirbek said. “The first time was on July 10, the second in September. They asked me whom I was getting visas for through ‘Aqqu’, the tourist agency where I worked. They also showed me photos and asked me to identify those people. They didn’t ask me anything else. The earlier accusations were successfully forgotten. On November 4, a group of guards came for me with my file in their hands. I asked them if they were going to release me. They told me that they’d be taking me to a political education center.”

Outskirts of Turpan, in northwestern China.

The center authorities didn’t initially accept Omirbek Bekaly because his medical records said that he suffered from hypertension. So the police took him to a hospital and had his medical records updated, after which they placed him in the political education center. In the center, the detainees’ daily routine involved singing songs about the Party, lauding the Party and the current president, Xi Jinping, before their meals, and studying Chinese language, history, and laws. Omirbek said that he didn’t comply with any of these requirements, and as a result was left without food for two days. He said that he was not guilty of any crime, and was subsequently released on November 24.

“After being released from the political education center, I went to Karamay’s internal affairs office,” Omirbek said. “There, they extended my visa by 15 days and told me that I could leave China during this time. They apologized for the unlawful arrest. I told them that I was determined to get my visa extended by a month and to go to Beijing with a complaint of my rights having been violated. The police told me that I had that right and that they weren’t against this. However, they were quick to warn me that I wouldn’t be able to return to China ever again. ‘Don’t forget that all your relatives are here,’ they told me. My father would later stop me from filing the complaint, saying that I could be stripped of the right to carry out his burial in the future.”

Omirbek Bekaly is now recovering from his health and taking some time off from work. He says that his wife and three kids, the oldest of whom is eight, got by during his absence thanks to the help of neighbors and friends.

GOING TO CHINA FOR DEREGISTRATION

Almaty resident Hamza Koksebek told Azattyq that his younger brother, Orynbek Koksebek, born in 1981, has been at a political education center in China’s city of Chochek (Tacheng) since December 15.

“Our whole family moved here in 2012,” he said. “We got Kazakhstan citizenship right after.”

In talking of his brother, Hamza said:

“My younger brother is still a bachelor. He’s not interested in people much and just herds livestock in the steppes.”

Orynbek Koksebek, an ethnic Kazakh with Kazakhstan citizenship who, according to his relatives, was detained in China.

According to Hamza, Orynbek went to China in the middle of December 2017 to obtain documents confirming his deregistration in China. He spent approximately a month in China getting the paperwork done. While returning home, he was detained at the “Bakhty” border crossing and taken back to Chochek.

“We’ve now learned that he’s at a political education center in Chochek,” Hamza said. “We don’t have any other information. While being detained, he was asked why – from 2012 on – he never returned to his home country to be deregistered in a timely manner. The truth is that, according to Chinese law, you are automatically removed from the register upon obtaining the citizenship of another country. And this was never an issue until the April of this year.”

Hamza Koksebek brought his brother’s situation up with Kazakhstan’s MFA. However, he has yet to receive an answer. [update: Orynbek was released in Marchand is back in Kazakhstan]

DETAINED IN THE SPECIAL ECONOMIC ZONE

Kazakhstan media has previously written about the detaining of Asqar Azatbek by Chinese police in front of the “Samruk” shopping center in the Korgas visa-free special economic zone on the Kazakhstan-China border.

Asqar Azatbek moved from China to Kazakhstan seven months ago [spring 2017], and obtained Kazakhstan citizenship on October 7. After moving from Xinjiang’s Ili Kazakh Autonomous Prefecture, where he had worked different government jobs, he went into business. In December, he went to the market at Korgas with his friend Orazzhan Sultanali to organize a business meeting with Chinese entrepreneurs.

In the second half of the day on October 7, 2017, Asqar Azatbek and Orazzhan Sultanali passed through the Kazakhstan customs check at Korgas and arrived at the Samruk shopping center. At this point, two jeeps came to a halt in front of them, with seven or eight Chinese nationals emerging from the cars and surrounding the two men. Orazzhan was let go, while Asqar was physically forced into the car and taken in the direction of the Chinese border. Azatbek’s relatives talked about this in a video statement published on Facebook.

“At three-thirty in the afternoon,” she said, “he called and said that he spoke with the customs directorate about obtaining some land on the Korgas ICBC territory. Less than an hour later, he was kidnapped. I go to talk to the city police and customs every day. There’s been no news at all.”

Azattyq reporters have repeatedly asked the head of the MFA press office, Anwar Zhainakov, for comment in relation to Asqar Azatbek’s and Orynbek Koksebek’s situations. However, they have been unable to get a reply.

An Azattyq reporter has also called the Chinese consulate general in Almaty to ask about Orynbek Koksebek and Asqar Azatbek, who, as affirmed by their relatives, are “currently under arrest in China”. The unidentified consulate worker who picked up the phone said that he had no information regarding the aforementioned people.

“You should address a letter to the consul general to get information about them,” the Chinese consulate worker informed the reporter. “In that case, there might be a reply.”

Azattyq has been reporting on the oppression of ethnic Kazakhs and the arrests of some Kazakhstan citizens in China since last May.

Nurtai Lahanuly was born in 1973. He graduated from the Department of Philology of the Al-Farabi Kazakh National University in 1998. He has worked for the Kazakhstan Zaman paper as well as for Kazakh radio. He has been working at Azattyq since 2004.